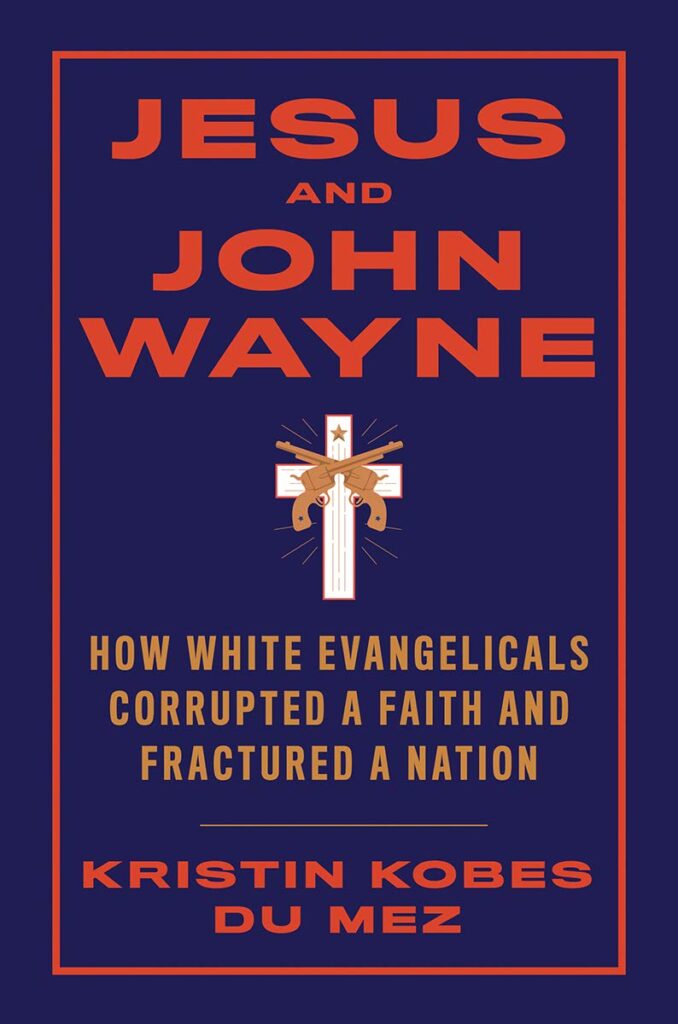 Kristin Kobes Du Mez (pronounced “doo may”) is a professor of history and gender studies at Calvin University in Grand Rapids, Michigan. In Jesus and John Wayne: How White Evangelicals Corrupted a Faith and Fractured a Nation, she lays out a seventy-five-year history of evangelical culture with an aim towards explaining the cultural rise of Donald Trump among white evangelicals. That is at least how the jacket describes the book, but I believe this to be a poor description. Although the introduction makes plentiful mention of Mr. Trump, the body of the work doesn’t mention him until page 251. This may not actually be Du Mez’s fault. In a video where she discusses the tone of the book, she notes how the main title of the book was easy to determine but the subtitle was not:

The subtitle, however, was difficult. It was made especially difficult by the fact that my publisher ended up dictating that I was not allowed to use the words ‘masculinity’ or ‘militarism’ anywhere in the subtitle or the title of the book, and this was simply because they were big words, and this is a trade book — it’s made for popular audiences — and they wanted a book that people would pick off the shelf. For me, this was a problem because I’d always considered this my book on white evangelical masculinity and militarism, and so to have to come up with a description of the book not using those two key words was a challenge. [emphasis mine]

So let’s start off by naming the topic more accurately than the publisher wanted to allow: “white evangelical masculinity and militarism.” Since the book was published in June of 2020, they naturally had the impending general election in mind.

Jesus and John Wayne does a decent job of historically documenting actual problems in American evangelicalism. However, its ideological slant and snide tone get in the way of having a more positive impact, instead choosing to conjure the cheers of a choir which seeks to have its own left-leaning biases confirmed.

Du Mez takes the title from a Gaither Vocal Band song called “Jesus and John Wayne,” a song that contrasts a tender image of Jesus and a rough-around-the-edges image of John Wayne. So goes the refrain:

In the second chapter, titled “John Wayne Will Save Your [Rump],” Du Mez cites Wayne as an archetype of the ideal masculine role model within a white evangelical culture that overlooks his three marriages, multiple affairs, racist views, use of profanity on-screen, and avoidance of serving in war himself. While Du Mez does repeatedly return to Wayne in terms of his image and political activism, there’s a lot more going on in the book to which the title fails to hint. 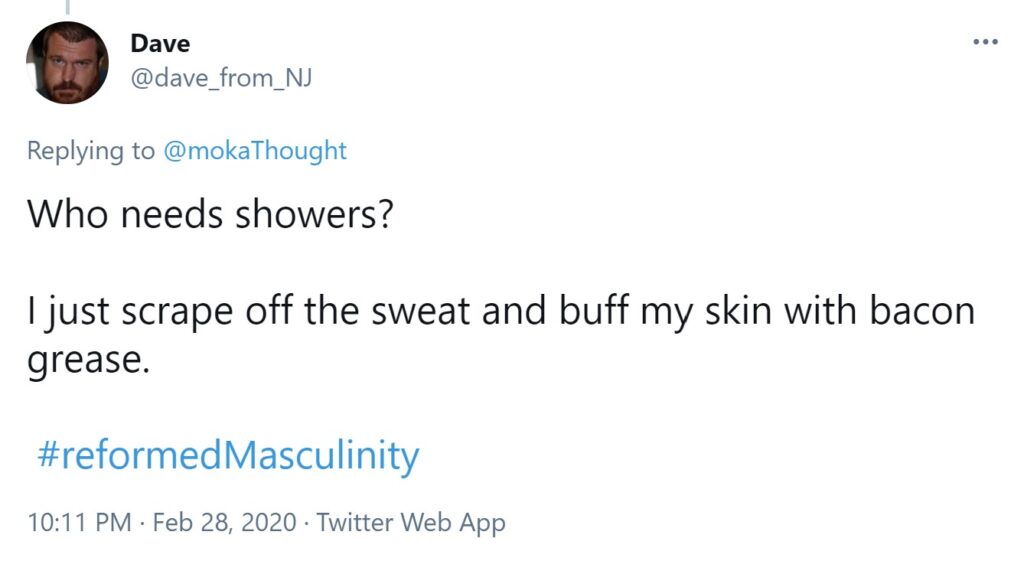 For the theologically conservative reader, Jesus and John Wayne starts off as a real drag. We learn right away that “Christian nationalism” is “the belief that America is God’s chosen nation and must be defended as such” and that it “serves as a powerful predictor of intolerance towards immigrants, racial minorities, and non-Christians. It is linked to opposition to gay rights and gun control, to support for harsher punishments for criminals, to justifications for the use of excessive force against black Americans in law enforcement situations, and to traditionalist gender ideology.” Immediately, the conservative reader probably feels straw-manned; rolls his eyes at the mentions of ‘gay’ rights, gun control, and strong criminal sentencing; and feels as if he has been asked, “Have you stopped clubbing baby seals?”

We later find that “For conservative white evangelicals, the ‘good news’ [are these scare quotes?] of the Christian gospel has become inextricably linked to a staunch commitment to patriarchal authority [this is code for complementarianism], gender difference, and Christian nationalism, and all of these are intertwined with white racial identity.”

We even learn that LifeWay stopped carrying Rachel Held Evans and Jen Hatmaker’s books but still continued carrying The Deplorables’ Guide to Making America Great Again by Todd Starnes and The Dark Side of Islam by R. C. Sproul and Abdul Saleeb. Boy, that escalated quickly!

It is immediately apparent that Du Mez’s audience and the general readership of Things Above Us are mutually exclusive. And yet there is some good going on here.

Behind the framework of Du Mez’s politics and theology, much of her documentation of evangelicalism’s dealings with militarism and masculinity is quite useful. Billy Graham, for example, apparently made the masculine toughness of Jesus a large part of his preaching, and he wielded quite a bit of political power as well. The third chapter, titled “God’s Gift to Man,” covers Marabel Morgan and Phyllis Shafly. Morgan became popular by means of her book, The Total Woman, which contained marital prescriptions derived from a woman’s submission to her husband that go well beyond the biblical mandate and well beyond Things Above Us fare. Shafly was a Roman Catholic but was otherwise on “our side” when it came to abortion and the Equal Rights Amendment and therefore became a leading name among evangelicals.

More modern problem names that Du Mez covers include James Robison, Pat Robertson, John Eldredge (author of Wild at Heart), Douglas Wilson, the Quiverfull movement, Mark Driscoll, Emir and Ergun Caner, James Dobson, Eric Metaxas, Robert Jeffress, James MacDonald, Oliver North, and C. J. Mahaney. Naturally, John MacArthur becomes part of the crossfire — neatly and (un?)ironically tucked between mentions of Mark Driscoll and James MacDonald — because he’s John MacArthur. The run-up to the U.S. invasion of Iraq also gets documented. Are there problems with misconstruing and idolizing masculinity and militarism in Christianity? You bet there are. So portions of this book might come in handy for me later for research purposes.

You might have seen a couple of times in this review already that Jesus and John Wayne‘s tone is edgy and combative. There really is no rhetorical attempt to draw conservatives into the conversation, and some elements will leave the reader scratching one’s head concerning Du Mez’s theological convictions. Placing “good news” and “getting saved” in seeming scare quotes is either a denial of soteriology or ridiculously high nitpicking.

Race, unsurprisingly, pervades the entire work. There is never any accounting for improvement in race relations in the United States. According to Du Mez, the reason why evangelicals largely opposed Barack Obama, who professes to be a Christian, is not because being a pro-abortion Christian doesn’t make any sense but rather because Mr. Obama is black.

An African American with the middle name of Hussein, Barack Obama challenged the values—spoken and unspoken—that many white evangelicals held dear. As an adult convert to Christianity, he could speak with eloquence and theological sophistication about his faith, but for many evangelicals this mattered little. For some, racial prejudice shaped their political leanings. But even for those who did not hold explicit racist convictions, their faith remained intertwined with their whiteness.

Various people and groups Du Mez mentions encourage the use of profanity in the name of masculinity, but Du Mez herself fights crudeness with crudeness by using it in chapter titles and making no effort to smooth over the crudeness of others where it would have been appropriate. Chapter titles include “John Wayne Will Save Your [Rump],” “Spiritual Bad[rumps],” and another where I’m just not going to try.

Ordinarily, I would not go after typographical or formatting errors other than just to say they exist, but we’re in a present situation where (1) the other side has called this fair game against a pre-release copy of Voddie Baucham’s Fault Lines, and (2) these particular errors are actually quite obnoxious and appear to be an intentional, selective slight against the United States military. In short, Du Mez does not capitalize certain military names and titles where they are otherwise appropriate.

The following are examples of how this looks. I’ve added one [sic] here where the issue is not capitalization:

In 1991, Dobson had moved his organization’s headquarters from Pomona, California, to a 47-acre complex in Colorado Springs overlooking the air force academy.

The mission to combat an alleged evangelical takeover was led by Mikey Weinstein, a 1977 honor graduate of the academy, former air force officer, and former legal counsel to the Reagan White House.

In 1983, army chief of staff General John A. Wickham Jr. tapped Dobson—who had just been named the NAE’s “Layman of the Year” for his work in “saving the family”—to spearhead a campaign to inculcate evangelical “family values” within the military.

One year into college, he enlisted in a marine corps officer’s [sic] training program at Camp Lejeune, where he was smitten with the mystique of the marines, whom he saw as “the toughest, the bravest and the best.” Before long he secured a transfer to the United States Naval Academy in Annapolis.

None other than marine colonel John Grinalds—Oliver North’s supervising officer in 1978—wrote an article detailing his longstanding practice of “evangelism in command.”

This serves as a nice segue into a final point concerning evangelism. Here’s a fuller quote concerning the Air Force Academy (see how I did that?) situation:

The mission to combat an alleged evangelical takeover was led by Mikey Weinstein, a 1977 honor graduate of the academy, former air force officer, and former legal counsel to the Reagan White House. Weinstein and his family were Jewish, and both of his sons attended the academy, where they encountered aggressive Christian proselytizing at times tinged with anti-Semitic undertones. Weinstein began to gather documentation, and his complaints led to an investigation that revealed a “pervasive” religious intolerance at the academy. A number of questionable activities came to light. Johnny A. Weida, the commandant of cadets, came under scrutiny for creating a call-and-response chant that had cadets shouting “Jesus Rocks.” The academy’s football coach prayed to the “Master Coach” in the locker room and had a banner emblazoned with the words “Team Jesus.” An annual Christmas message in the academy’s newspaper proclaimed that “Jesus Christ is the only real hope for the world.” Flyers advertised a screening of Mel Gibson’s The Passion of the Christ at every place setting in the dining hall.

Gibson’s film wasn’t your run-of-the-mill Hollywood movie. Filled with graphic scenes of Christ’s crucifixion, its depiction of Jews struck many critics as anti-Semitic, an allegation that gained traction after Gibson’s anti-Semitic rant during a 2006 drunk driving arrest. For many evangelicals, however, watching the movie was an act of devotion. Evangelicals were already fans of Gibson’s work. Gibson was Catholic, but evangelicals recognized that they shared the common creed of militant Christianity and heroic masculinity. For many evangelical writers, references to Braveheart rivaled biblical references when it came to discerning God’s will for men. The Patriot, too, offered a heroic vision that was sorely lacking in modern America. But nothing matched evangelicals’ fervor for The Passion. [emphasis mine]

Evangelicals indeed should not have been that enthusiastic about The Passion of the Christ even before we start debating our divergent views of the Second Commandment. (You have to wonder what iconoclast Reformed Christians thought of all the advertising on campus.) This particular accusation of anti-Semitism, however, really is just an offense at the necessity of penal substitution. How does one produce a positive depiction of people who want the Son of God crucified? It is indeed strange that Du Mez zeroed in on this particular allegation of anti-Semitism rather than potentially clearer examples, such as his son being asked “how it felt to kill Jesus.” Conveniently left out of the details is that Weinstein is head of the Military Religious Freedom Foundation.

Hidden underneath its snide tone, seeming scare quotes, profanity, and false theological assumptions, Jesus and John Wayne does well to document idolatry of masculinity and militarism in American evangelicalism, but I fear the meat is not worth the bones for most of our readers. You may want to keep a Google Books search of it in the back of your mind when it name comes up. 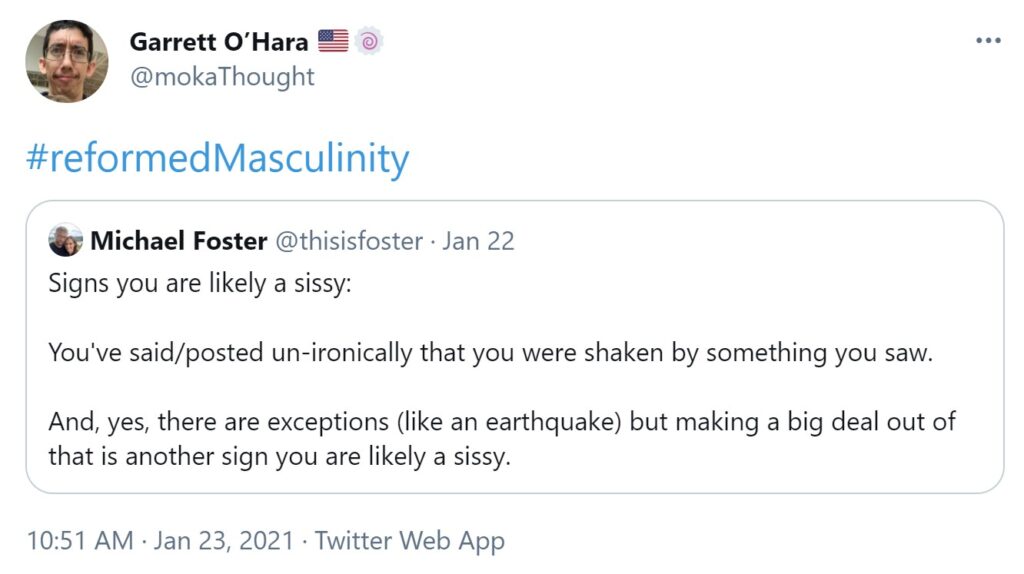