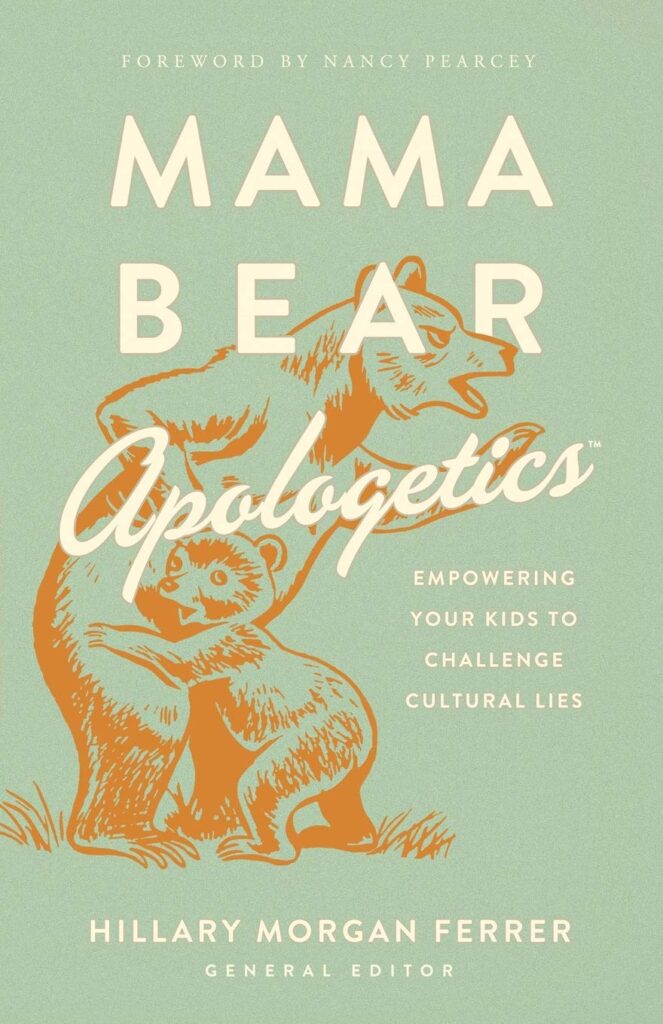 I became aware of Mama Bear Apologetics by means of the Wokeness and the Gospel conference last month. The book somehow became in high demand at the bookseller table and sold out. Luckily enough, the parents of one of the authors were attending the conference, so they went home and grabbed a box of more copies. Those sold out, too.

It’s been out since 2019, so we already have a good number of reviews that are easy enough to find. For example, one Amazon reviewer writes:

Fantastic guide for the separation of children and serious thought.
This book provides effective strategies for isolating children from reality, limiting their access to knowledge about how the world is, and countering such knowledge when it does crop up. Any kid raised by this book will go out into the world well equipped to never, ever change their mind about anything, ever, for any reason.

And I guess that’s the whole idea?

Well, kind of. Maybe. Given the similar nature of the two- and one-star reviews, this ought to be good right?

Mama Bear Apologetics: Empowering Your Kids to Challenge Cultural Lies is an introductory course of apologetics targeted towards moms seeking to guard their children against the assault of non-Christian worldviews in the present culture. To this end, it does a decent job but is not the slam dunk for which I was hoping.

The book is eponymously named for its ministry, Mama Bear Apologetics, which runs a blog and podcast and does traveling speaking engagements. The head of the ministry, and general editor for the book, is Hillary Morgan Ferrer, who holds a master’s degree in biology from Clemson University and is presently working on a master’s degree in apologetics at Biola University. Ferrer writes several but not all of the chapters. She co-authors some with others, and some chapters are entirely by other authors.

In this post, I’ll start by explaining the layout and method of the book. I’ll then explain the pros and cons from my viewpoint.

Mama Bear Apologetics begins by laying a foundation for the mother (or influential family member, Sunday school volunteer, etc.) seeking to learn and practice apologetics for children. The first chapter is appropriately titled “Calling All Mama Bears—My kid has a cheerio shoved up his nose. Why am I reading this book?” and calls for moms to awaken to the need to learn and do apologetics. The following chapters in part 1 cover the practice of apologetics, their particular method, and watching out for “linguistic theft,” where words get twisted beyond their original meanings in the interest of rhetorical advantage.

Part 2 is called “Lies You’ve Probably Heard but Didn’t Know What They Were Called.” Each of these chapters covers a particular worldview and follows the method described in chapter 3. First, the chapter will introduce and describe the worldview at hand. Following this, the authors go through the acronym ROAR:

The chapters then suggest a way of praying concerning the topic. The book calls this “PAWS for Prayer,” which is a variation on the “ACTS” prayer acronym with which you might be more familiar. PAWS stands for:

The particular worldviews receiving their own respective chapters are:

In my opinion, the book is mostly an easy read and written at an appropriate level for its target audience. I qualify this with “in my opinion” because there may be wide disagreement here. One Amazon review found the reading level to be “patronizing” and “maddening,” so your mileage may vary.

The breadth of worldviews covered is mostly good, and the method allows for the reader to practice what is taught towards anything else that might turn up. It also does well to keep main things main things. In other words, with such a short amount of space for each worldview, the way each is addressed does hit their foundational flaws.

Brevity also has its disadvantages. Obviously, it makes it harder to address every possible angle on a particular subject. I’ll address naturalism because I think it segues nicely.

The naturalism chapter is appropriately titled “My Brain Is Trustworthy…According to My Brain” (ellipsis original). That does well to summarize the issue of naturalism. The chapter covers various overarching historical worldviews from premodern to whatever we’re supposed to call “post-postmodern” in due time. This had to be difficult to do in such a short text. Ferrer then covers some practical implications of naturalism: what did create the universe, and what did create life? Then we see the aforementioned ROAR method. Under “ARGUE for a healthier approach,” we get about a page about how “science and Christianity are friends.”

My TAU co-writer Michael already knows what’s missing here without me asking and without having read the book: creation in six literal days. It’s not there. In fact, when we dig into the Mama Bear Apologetics website, we find an endorsement from Kenneth Samples, a senior research fellow at Reasons to Believe, a day-age creation ministry (meaning that the six days of creation in Genesis are taken to be very long periods of time).

But Garrett, that’s not apologetics. That’s just a doctrinal position.

I disagree. For one, creation in six (24-hour) days at least used to be the thing for which we were most mocked in the culture, and it’s still a point of contention for people now.

Second, and more importantly, this is a matter of foundation. You’re losing all kinds of foundational necessities if you deny creation in six literal days. Your view of biblical authority is deficient. Your hermeneutic is deficient. And if you deny historical Adam and the messianic bloodline, you lose the kingship of Christ, Adam as the federal head of man, Christ as last and better Adam, and the necessity of the gospel. Is an unbeliever’s rejection of being born dead in sin not an issue of apologetics?

(To be clear, Reasons to Believe affirms historical Adam, and it appears that the Mama Bear Apologetics ministry does as well, but this is still a critical apologetics issue that the book gives too little attention.)

Before the topic of the day in Christian social media arguments became critical social justice, it was inerrancy. The term itself appears once in the book, and it’s within a short biography of secular textual critic Bart Ehrman, who dropped the doctrine and then his association with Christianity. But we don’t get a foundational defense of inerrancy in Mama Bear Apologetics. Without them being named, the issues of scriptural inerrancy and authority receive a bizarre treatment in the second chapter. In a portion describing the “Four Key Traits of Mama Bears,” we read:

Honesty—As Mama Bear apologists, we must be intellectually honest. If someone showed you Christ’s body and could somehow prove without a shadow of a doubt that it was His and He had never risen from the dead, would you still be a Christian? This scenario is difficult to imagine in reality, but the point is that we are to be careful followers of truth—scientific, historical, and metaphysical.

So here we also have a problem with biblical authority not unlike when apologist Frank Turek wrote that Christianity can still be true even if we don’t have an inerrant Bible. For a book that’s written at an easy-to-read level for busy moms who feel they are behind the curve, I think this is a big miss. And as long as historical truth is being mentioned, the book also doesn’t address the reliability of the Bible’s textual transmission.

Smaller concerns also manifest. The book positively quotes heaven tourism book monger Ed Stetzer to help show that church youth groups are too shallow. The chapter on emotionalism advocates teaching kids the “Z-Model” of decision making from the Myers-Briggs Type Indicator. Suggested readings in the back of the book include two works by Ravi Zacharias. The edition I have was published in 2019, so this is before the most recent confirmations of Zacharias’ sexual sin, but it’s well established that Zacharias was a poor apologist before the full public confirmation of his misdeeds.

Finally, as long as progressive Christianity is an appropriate worldview to target, the charismatic movement is as well. The movement appears to be mentioned nowhere in the book, and Ferrer notes at one point that she attended Matt Chandler’s Village Church, which does hold to some charismatic theology.

There’s some to like about Mama Bear Apologetics, and it’s not blaringly unorthodox. But it does miss the high mark that had been set by the enthusiasm I had heard for it. Missing the critical foundations of biblical authority and inerrancy makes the rest of the work much less effective and useful. Given the lack of these foundations, the work does provide some nice encouragement for mothers and a basic overview of how to evaluate worldviews. However, much more biblically-centered worldview analysis can already be had for free from a multitude of sound ministries. The apologetically-minded GotQuestions.org comes to mind immediately.